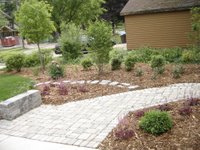 Until a year ago, I never had a garden. I'm not talking foundation plantings that you plop shrubs in and forget about, or the inevitable patio pots for doomed tomatoes and hot peppers and assorted herbs.

I'm talking a bona fide garden. Two falls ago we cleared out a portion of our front yard between the lawn and the front door, fertilized it, mulched it, and waited for spring. We spent the winter creating one plan, then another, mapping out our layouts by light requirements and height and spread. When the weather warmed up enough to start planting in went the heuchera ("Coral Bells"), five Knockout rose bushes, a viburnum, two Serviceberry bushes, seven PJM rhododendrons, three Carefree Sunshine rose bushes, and two types of fountain grass. Later in the spring seven Sky Blue Asters and an assortment of Peonies arrived; as did a tub of muddy red Canna tubers, which I didn't so much plant as bury. (The joke was on me, as these were awesome performers as the summer went on, creating a massive hedge of tall green foliage with spikes of freaky red flowers).

For the corner of the house next to the garage, seven Russian Sage plans and a dwarf crabapple went in.

In the fall, three Red Twig Dogwood bushes and a buddleia landed, as did something on the order of 600 bulbs from Whiteflower Farm, Old House Gardens and our local Platt Hill nursery; in the course of one long day crocus, alliums, fritillaries, tulips, irises, and daffodils/narcissus were plopped into holes, dusted with fertilizer and buried again.

Last summer we had a drought here in the greater Chicago area, so while some of the garden seemed to do OK (the Russian Sage was the big winner) and some didn't (the heuchera and asters needed special attention, and the buddleia may have been planted too late in the season to take hold), we realized that we wouldn't really know how well we did until the following Spring.

You plan, you prepare, you execute, you adapt, then you wait. Some of what you did will pay off, some won't. We'll cut our losses, try something new, cut back, build out.

The difference is that unlike gardens, where you need to exercise patience, modern software marketing is an increasingly real-time affair. I'll be speaking at next week's Software 2006 conference in Santa Clara on this topic.

And who knows, I may sneak in a gardening metaphor.