innovation: starbucks goes to the movies 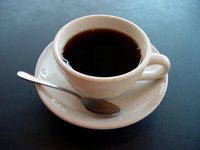 As part of our endless pursuit of caffeine the wife and I stopped at one of our many local Starbucks yesterday afternoon. The smiling baristae were each wearing green tags bearing big words like "pulchritude", "euonym" and "pococurante".

After I claimed my coffee (black) and my wife's venti mocha soy latte amontillado fresco (not-black), I went on to discover a large number of equally green coasters artfully scattered throughout the place. Then I noticed that even the cardboard heat shields protecting my hands had been drafted for flash-card duty.

It was all part of a clever (and much broader) integrated marketing campaign designed to promote "Akeelah and the Bee", which opens on April 28th. The movie, "co-presented" by Lionsgate Films, 2929 Entertainment and (surprise!) Starbucks Entertainment, is the "inspirational story of a precocious eleven-year-old girl (Keke Palmer) with a gift for spelling."

(Of special note is Starbucks' use of typography to create a distinctive mood; check out the microsite created for the campaign, then imagine what it would have looked like in Caslon or Perpetua.)

Whether the precocious eleven-year-old girl displays an equally precocious gift for pulling the perfect short shot of espresso remains to be seen, but I had to admire the complete committment in evidence at Starbucks to push the movie. I'd never seen Starbucks throw down a promotion like this - but when I read reports that they're getting points off the gross, it made perfect sense.

This campaign is the first of what I anticipate will be a new trend in how movies are marketed.

Why? Starbucks can deliver the movie's message directly to the ideal buyer - coffee-drinking socially-conscious brightniks with well-thumbed thesauri and a social conscience - with greater efficiency than Lionsgate could ever manage. It's a great example of targeted marketing.

It's also good business - for both Starbucks and Lionsgate. With only $10 million spent (allegedly, per the above link) to make the darned thing and a minimal marketing spend on their own, even if audiences punt on the theatrical release Lionsgate will more than make it up on DVD. Which we'll all be seeing at Starbucks come June. Along with the soundtrack.

So here it is: Lionsgate makes movie, jobs out marketing to an efficient partner, pays a few points on the gross. It might not set the world on fire, but it's a perfectly conservative strategy for optimizing profit and minimizing risk. It's even better for Starbucks - I can bet their exposure is limited but their upside is huge. In return for "delivering" their customer base, of course.

And that's the key to the future for this trend.

If it works, expect more of the same not just from Starbucks, but from the likes of Target and Borders as well (for example). Speciality retailers with lifestyle brands are uniquely positioned to match audiences with product, which as you know is the most difficult, most risky part of the movie-making business. It's so simple it makes my eyes hurt.

Old-fashioned product placements won't go away - but they're purely pay-for-play exercises from now on. The real money will be in what Starbucks is doing. My hat's off to their marketing department for getting it right.