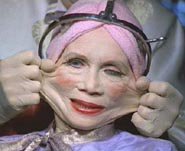 My trip to England opened my eyes to a whole world of new brands, including Danone - which translates in the States as Dannon. Are Americans unable to pronounce Danone, perhaps because of its vaguely French da-NUN or da-NO-nee pronounciation, as opposed to DAH-nun, which sounds nice with a Chicago accent?

Then somewhere in the ballpark of my second cup of coffee I saw a commercial for "Revlon Age Defying Makeup with Botafirm(TM) for Dry Skin". Revlon's website describes Botafirm as "a patented blend of hexapeptides and botanicals". Hexapeptides are amino acids that reduce the production of the enzyme needed for muscle contraction. If you buy that facial wrinkles are caused by facial muscle contractions then reducing the number of facial contractions will reduce wrinkles, QED.

Since this is the value proposition of Botox, they wanted to create a name that was Botox-ish, but still intelligible to the unwashed wrinkly masses. Ergo, "Botafirm", which is marginally superior to "Botofirm" or "Botifirm", two names that must have been short-listed by the Revlon naming gurus but lost out in the final focus-group rounds.

So we're left hearing about Botafirm. Makes sense, intellectually. But it "sounds" like something you use to shore up the hull of your water-going vessel. No matter, the buyer is someone with an imagination who is buying into a dream, a promise, not something clinical with defined proof points.

No wonder software marketeers don't make up names - our buyers are cynical and dream-free, and would crucify a product with a silly-sounding name as an insult to their intelligence. This must be why it's only free software that gets the fun names. . . which you could argue is why free software is so much more fun. Hmm.