lesson: working with the press (part 1) 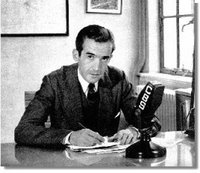 I hesitate to characterize it as a "fear", for doing so immediately activates the pride of the reader who, in a fit of pique, proceeds to reject any suggestion that any aspect of work elicits fear, and stops reading.


But between us kids, let's be honest. There is a wide-spread fear of the press among software product marketing types, who experience an involuntary transverse colon-clenching sensation of abject misery when it comes to dealing with the press in any of their many incarnations.

"With good reason!" you cry. You say you know of someone who committed a CLE (career-limiting error) in an interview? Someone who "thought they were off the record" and shot their mouth off? Someone who talked when they should have shut up? Or worse - far worse - someone who had an opportunity to talk and elected to say nothing?

To you, gentle reader, all I can offer is this: knowing how to interact with the press is a skill that will serve you well. But much like scuba diving, driving fast, spelunking, sky diving, bungee jumping, getting married, playing with pit cobras, operating a cherry picker, bull fighting, alligator wrestling, manufacturing fireworks (and so on) it can be dangerous if you don't know what you're doing, but quite rewarding once you do.

So as we begin our discussion on working with the press, I offer you the following for your consideration. I'm taking it as read that you are articulate, succinct, well-coached and aware of your objective, that you know what is and isn't covered under NDAs (long story), and that you're talking to someone you actually want to talk to:

There is a lot more than this, but on a Sunday afternoon, I think it's enough to start. Next time I'll share some guidelines for how to manage your personal relationship with the press. Hint: you need one.