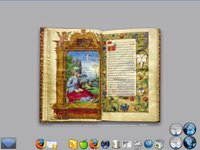 When asked what I would do with the money if ever I won the lottery (not some small prize, mind you, but a real whopper), I generally say I'd buy a house in New England, stash enough to create a decent income stream, and blow the rest on books.

Bibliomania is a hideous affliction under normal circumstances, believe you me. But I bet I could turn it into something truly wrong with enough cash. And I'd start with some of the texts you can find at Octavo Digital Rare Books, by gum.

But since I have not won the lottery, and given that even if I did, creating suitable storage for such texts would ruin the fun of owning them, I can still take some pleasure in enjoying them at Octavo.

For those of you unfamiliar with the site, it's the creation of Paul Allen who, in a fit of inspiration, realized that modern high-resolution photography could offer scholars and other fans of nice books the ability to study the rarest and most beautiful of them without having to endure the sorts of cavity searches generally inflicted on those brave souls who attempt to do so in person.

Since most of these books rarely see the light of day, it's a wonderful service. I encourage you to visit the site and browse the editions - while you won't get the whiz-bang benefits of actual ownership of a digital copy, you can view some of the pages, and if you're clever, save the image to your computer and view it on your desktop.

For example, I've got an illuminated page of the Horae Beatae Mariae ad usum Romanum (France, 1524) on my desktop. Normally, this book languishes in the vaults of the Lessing J. Rosenwald Collection in the Library of Congress, protected around the clock by hard-looking librarians with shock rods. But I enjoy it every day, nyah.

For an added thrill, match the background of your screen to the particular shade of grey used as a background to the open book, such as I've done on the picture associated with this post. It's a nice effect.

By the by, that's a screenshot of my Windows XP desktop, using Konfabulator and ObjectDock for widgets.