You Want a Mongolian Travel Wrap

When the temperature drops outside, I mean, really drops, not this oh my it's chilly here in suburban DC but HOLY CRAP I CAN'T FEEL MY NOSE, nothing else matters but finding a way to Not be Cold. As your core temperature drops and your ability to reason goes out the window (freezes and shatters into dust), you will realize you want, no, need, a Mongolian Travel Wrap.  Oh my, yes you will.

But first, let us consider the source. 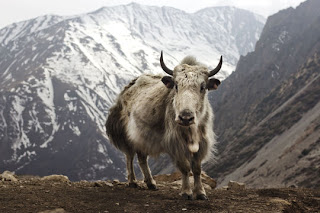 This*, my friends, is a Yak, known to clever folk as Bos grunniens.  Say hello to Mr. Yak.

Now I don't know about you, but this does not look like a docile, hey buddy, come on and grab some of this sweet, sweet hair I'm sporting here and turn it into a blanket, I'll just hang out until you're done.

No, it looks like something that would run you down and turn you into something only vaguely reminiscent of a bipedal hominid.  And it wouldn't care.

Thankfully, two bright-eyed, clever fellows named Julian Wilson and Aaron Pattillo made nice with some much heartier, yak-friendly types in Mongolia and figured out a way to separate the yak - actually, a rather large number of yaks - from their sweet, sweet hair:


Their pursuit took them back to the far reaches of the Tibetan plateau, and then north to the steppes of Mongolia, where they experienced yak wool auctions, tortuous rides in Russian made jeeps, large mugs of yak butter tea, fiery local drinking sessions of the homemade yak milk liquor archi, and, naturally, a lot of yaks.

Flush with piles of yak hair, they have crafted something you can use to keep your sorry ass warm.  Brilliant.