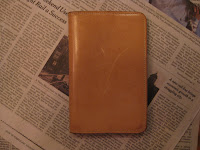 Readers of ack/nak know of my great regard for Steve Derricott's wonderful Moleskine covers. Since their debut back in 2007, they've become the must-have cover for serious note-takers who want to protect their moleskine notebooks (both large and small) in the field.
A few months ago Steve sent me a prototype of a new notebook cover he's been fooling around with, with the request to try it out and let him know what I thought of it.
The Gfeller Casemakers Field Notes cover is fashioned of the same natural kip leather Steve uses to make so many of his professional products. 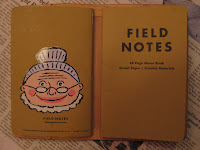 It is a "soft cover" designed to hold two of the Field Notes notebooks, the first of which is secured by sliding its front cover into the cover's inner front flap, the second being secured by sliding its back cover into the cover's inner rear flap. It's simple, and it works.
Those of you who are familiar with the Gfeller Casemaker moleskine covers know that these covers start out light tan - and over time weather naturally to a rich dark brown. That's your reward for using them for a long time.
As Steve says, "details make the difference": I can tell that the sewn edges have been trimmed and the sharp edges hand-softened with an edging tool. I hope the photos can give you a sense of just how well-made these are.
It's important to mention that the Field Notes notebooks are not very thick, and they aren't particularly stiff. They benefit greatly from being wrapped in something more substantial and this case does the trick. Once loaded up with two notebooks, the ensemble has much more heft to it than if you stacked two notebooks up. 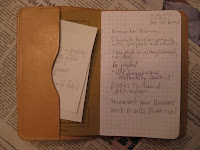 And you get the little plus of two secure little pockets you can sneak bits of paper into.
For my notebooks, I use a quad-lined notebook on the left for taking notes, and a plain notebook on the right for "bookmarks".
What can I say - Steve's got another hit on his hands. You could argue that putting cheap notebooks into a hand-made leather cover is overkill. I'll argue that if you're serious about keeping your notebooks in good condition until you can get them back to "home base", then you need some sort of cover, and there's nothing more effective and durable over the long term than one made with Old World attention to detail and quality.
Gfeller Casemakers
301 E. Bower St., Meridian, Idaho 83642
http://www.gfellercasemakers.com/

oh I thought you were using a Moleskine cover from Gfellers to put your Field Notes. Didn't know he is making one for Field Notes. Thanks for the review.

Congratulations! Your readers have submitted and voted for your blog at The Daily Reviewer. We compiled an exclusive list of the Top 100 product management Blogs, and we are glad to let you know that your blog was included! You can see it at http://thedailyreviewer.com/top/product-management

You can claim your Top 100 Blogs Award here

P.S. This is a one-time notice to let you know your blog was included in one of our Top 100 Blog categories. You might get notices if you are listed in two or more categories.

P.P.S. If for some reason you want your blog removed from our list, just send an email to angelina@thedailyreviewer.com with the subject line "REMOVE" and the link to your blog in the body of the message.

Thanks for this article. It is also a good example of how to combine real economy with the internet.

From the production perspective, these covers seem to be well done manual work (as you see in the video, like the oiling, the sewing, and the edge rounding, etc).