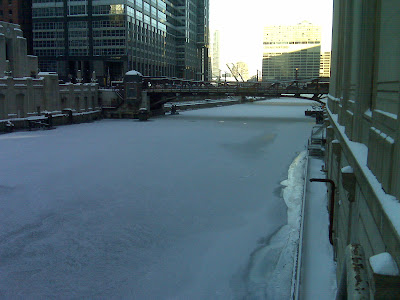 The last time I saw the Chicago River freeze was February 8, 2007. And whaddya know, I took a picture of it then too. For the record, it was much colder today than it was then. Much.

UPDATE: Adam, this picture was taken facing north from the eastern end of the Madison Street Bridge, just west of Wacker Drive. In the distance you can see the Boeing HQ, and on the right the massive box that is the Lyric Opera Building. The bridge you can see is the Washington Street Bridge.

I think I have one somewhere of the ice all broken up into triangles. Almost all of the pieces were triangular, and I never figured out why. I don't remember the date or anything, and it was so cold that I was taking the picture while running toward the train station. Nice pic!

It's amazing that it freezes with all the various unsavory ingredients in that water.

Where was this taken, Bob? I know "in Chicago" is the immediate response :-)

Just curious about the interaction / street?

"Beauty, pleasure, and the good things of life are intensified, and perhaps only exist, by reason of contrast." (Walter J. Phillips, 20th century Canadian watercolor painter)

The weather in Scottsdale yesterday was...