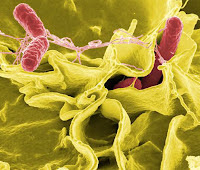 Let's say you've got a fever, nausea and vomiting, diarrhea, abdominal cramps and pain. Your diarrhea is very liquid, and lasts about four days. You're sick for about five to seven days.


You are not a happy camper.

What the hell happened?

Could be salmonella poisoning, an infection caused by a gram-negative bacterium of the Salmonella genus, most likely S. enterica.

Could be a Quato. More likely salmonella.

Around 1,000 Americans since April of this year have been clobbered by something usually prevented by effectively sanitizing food contact surfaces. That's not good.

In their search for the source of the worst case of food-borne illness in a decade, the Bright Minds in charge of making sure that our food supply isn't lightly garnished with S. enterica first turned their spotlight of shame on tomatoes.

Then it was peppers.

America, the truth can now be told. Someone evil-doer has turned salsa into a weapon of mass eruption.
UPDATE - Thanks go out to the ack/nak reader who left such outstanding comments to this post - make sure to scroll down to the comments section and read them.

Because the FDA and USDA standards for tracing food stuff are soooo poor they can't make the difference between a tomato grown in california and a cucumber grown in canada. once it is packed in america, everything is american and you can forget about what was before. there is no obligation to declare origination of foodstuff in this country. It is plain weird. are you sure these american best corn you BBQed last week didnt come from China where human S&%t is used as a fertilizer ?
In the UK (and in most of the world for that matter) you can tell which beast your steack came from. you can tell where that beast was killed, where it was farmed who were it's parents and what was it's last meal. I the US you can't tell anything further than what feedlot it came from.
The FDA and the USDA need to change their standards. it's a matter of public health. The UK FSA agents are a bunch of tossers but at least they work well.
http://www.food.gov.uk/

Forgot to say, did you know that rather than testing the actual food stuff for e-coli it is generally adnmited by the FDA that testing the production line surfaces is good enough. SO most food producer take measures off their worksurfaces, after a good clean up !!

and yes, I spent a few days bent over on the bathroom floor !