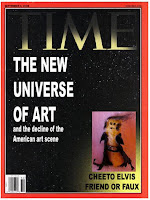 What follows is an excerpt from an article on the topic of Cheeto Elvis which has been submitted to Time Magazine, as well as a cover mock-up to accompany the article. I am grateful to the ack/nak reader responsible for obtaining and forwarding me this information.

Known for works which draw both admiration and ire, the highly reclusive and controversial artist known simply as “rabbi’ is back in the spotlight with his latest work, Cheeto Elvis. Always a lightning rod for critics his art has been described as everything from “frivolously ironic” to “total s__t.” Like all great works Cheeto Elvis asks more questions than it answers and leaves you thinking “what did I just look at?”

The man who fondly refers to Mahmoud Ahmadinejad as his muse and was linked romantically to Burl Ives (and is widely blamed for breaking up his 60+ year marriage) tends to bring out the best and worst from critics. Lisa Dennison the former artistic director of the Guggenheim and now head of sculpture sales for Sotheby’s proclaimed that Cheeto Elvis is utterly powerful and will, over the coming years, likely prove to be more impactful than Picasso’s Guernica. Conversely, Michael Kimmelman, chief art critic of The New York Times commented “Is this some kind of joke” and “This is, without question the most banal and sophomoric piece of crap that I have ever seen.”

Knowing the current frail state of the “rabbi” I have chosen to withhold my critique of his most recent work. Evidently the creation of Cheeto Elvis took a heavy toll on the artist. During the 6 month period of researching and crafting the work he stopped sleeping and became very depressed. Comparing his erratic behavior to that of Heath Ledger during the filming of Batman, those close to the “rabbi” claimed that by the time the piece was complete, they could no longer tell where madness ended and Cheeto Elvis began.

Our prayers go out to his ½ sister in Boca Raton and his dozens of loyal fans.