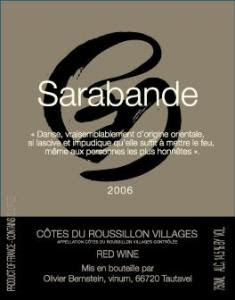 Côtes du Roussillon wines, like their Côtes du Rhône buddies, are some of my favorite wines, especially when you stand them up against charcuterie.

We did just that tonight. Well, to be honest, my wife and I did, the kids had pasta.


A few slices of pata negra, stinky cheese and Comté, some Fra'Mani Salametto, a little pâté, artichokes hearts, cornichons and a terrific baguette care of Fox & Obel were matched with the 2005 Sarabande Côtes du Roussillon Villages.

At about $13, it was tremendous; spicy, concentrated, with lots of black fruit and a deep, rich finish. It held its own against a meal that would have punished a lesser wine.

And you have to groove on the quote on the label:

It's a take on a description of the Sarabande by Juan de Mariana, a Spanish historian, political philosopher and Jesuit who lived from 1536 to 1623, translating as:

"Dance, probably of Eastern origin, so lascivious and shameless that it can start a fire, even with the most honest people."

where did you get your pata negra ? I have been searching high and low for some in the US and never got any...

Gildas
PS : are you 25 again ? can you hear this ? http://www.mosquitone.net/what-is-the-mosquitone.html

I got the pata negra at Fox & Obel in Chicago. After our email exchange today, Gildas, I think that the quality of pata negra I had is far, far inferior to the pata negra you're familiar with. Mine was brownish, stringy and very much "preserved". Yours is red and has a flavor that lingers for hours. Oh well.

And no, I can't hear the mosquitone, dambit. I'm lucky I can make it out of bed in the morning, now you want me to hear ultrasonic tones? Oi. :)