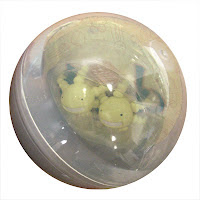 I'm enjoying Moyashimon enough after six episodes to start wondering if others are enjoying it too. One sure-fire indicator of a show's success is when the toys start surfacing.

So find a nearby gashapon machine.

Look at it very carefully.

If you see the smiling faces of Aspergillus oryzae peering out at you from inside the plastic capsules (like in this picture), start hammering it with 100 yen pieces. 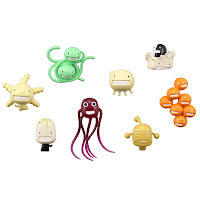 Kaiyodo's first series of Moyashimon magnets (site is in Japanese) features eight bacteria, including the hero of the show a. oryzae, e. coli and others including the one that soured the sake in episode 2 whose name I've forgotten...

The meta-issue here is pretty simple. When planning a new product, how far in advance do you line up industry support, and what triggers do you look to before you start engaging the second wave?

I like to have my first wave of support committed at launch, with second wave pending pre-determined success metrics (units sold, customer announcements, etc.) If you get to the second wave, you're doing well.

In the anime business, I see the emergence of toys as a sign of second wave support. Feel free to argue.

(previously - moyashimon: anime for microbiologists)
UPDATE 1 - Here is are two promotional images associated with the Moyashimon gashapon described above. There are other gashapon coming in March, but they're. . . plush. And therefore much too frivolous for display here. Ahem. 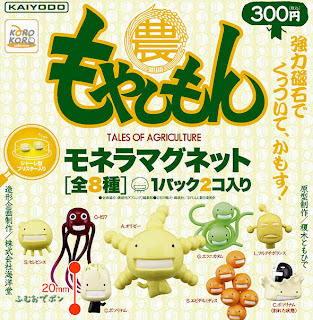 UPDATE 2 - Here is the homepage for the Moyashimon anime - there are some nice resources there even if you don't speak Japanese.