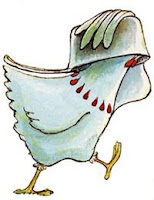 Eamonn Fitzgerald, eponymous author of Eamonn Fitzgerald's Rainy Day, dug into Andrew Keen's The Cult of the Amateur: How Today's Internet Is Killing Our Culture and Assaulting Our Economy last Wednesday.

I'm debating what side of the fence Mr. Fitzgerald sees himself standing on, especially in light of this:

Keen's got the buzz, because when it comes to blogging he's dismissive. No, make that contemptuous. "Bloggers today are forming aggregated communities of like-minded amateur journalists?.?.?.? where they congregate in self-congratulatory clusters," he says, and continues, "Millions and millions of exuberant monkeys — many with no more talent in the creative arts than our primate cousins — are creating an endless digital forest of mediocrity. For today's cult of amateur monkeys can use their networked computers to publish everything from uninformed political commentary to unseemly home videos, to embarrassingly amateurish music, to unreadable poems, reviews, essays and novels." Ouch! Me an "exuberant monkey"? That hurts.

Mr. Keen, of course, wishes to reserve the right of publication to those exuberant monkeys who, having endured years of penury and ritualized abuse at the hands of all-knowing editors, have truly earned the right to have their exalted monkey-script published on paper, wot wot.

Of course he's right - much of what passes for "journalism" and "writing" on the intrawebs is truly crap flung by exuberant monkeys (like your humble poo-flinging author (see word pairings)). Then again, a lot of "professional" published work is crap too. One man's Paris Review is another man's Teen Beat.

I originally hesitated to compare Mr. Keen to the operator of an ice-making business reading an advertisement for one of those new-fangled electric refrigerator thing-a-majigs. Then I read the last line of his book's synopsis (in fairness, he probably didn't write it, but as an exuberant monkey, I don't have to be fair, merely exuberant):

While no Luddite-Keen pioneered several Internet startups himself - he urges us to consider the consequences of blindly supporting a culture that endorses plagiarism and piracy and that fundamentally weakens traditional media and creative institutions.

I should say that I'll read the book then form an opinion. But that would be a betrayal of my exuberant monkey-nature. Besides, I'd just be tempted to cut-and-paste whole sections of it online, right?