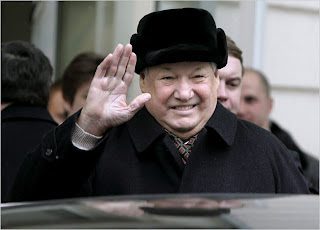 Boris Yeltsin, 1931-2007
The image of Boris Yeltsin making a speech from the top of a Red Army tank in August 1991 is burned into my memory.

From the NYT article linked below:

In an interview with Reuters in September 1991, Mr. Yeltsin described his feelings at the moment of the coup attempt: “At that time I had only one thought on my mind, and that was to save Russia, to save this country, to save democracy and the whole world, because otherwise it would have led to chaos, to another cold war — or a hot war, for that matter. And that would have been disastrous for the whole world.

“We need to pull them out, and we should continue along the road of a rule-of-law state, so that the people live better.”