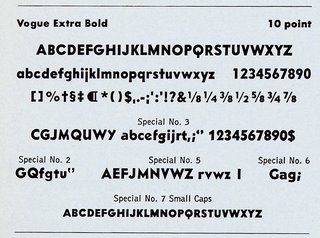 . . .an American sans-serif type, cut by Intertype in light and bold weights early in 1930. It had been created for Conde Nast of Vogue magazine, but was reelased also to the general printing trade. It is generally quote similar to Futura, but caps are the full height of ascenders, and descenders are a bit longer; most noticeable in the original version are the very long crossbar of G and the vertical tail of Q.

It's also one of those fonts that's slipped between the cracks. Find me a foundry with a digital version of the Vogue Bold and Vogue Extra Bold, and I'll. . .I'll. . .be very thankful.

Will you do that dance like Madonna does when you find it? If so, I request that you video tape it and put it on YouTube for all of us to enjoy.

I can't wait! This is going to be so great. I wonder what he will wear?

If we ever talk him into doing "Like a Prayer", it may well claim his immortal soul! We're just speculatin', that is!

OK, that's enough from the two of you loons (grins).

hey, bro, s'no big thang! This is how we roll in the A-Deuce!

Yea! After searching for Vogue for several years, I happened upon “Am Sans” at daFont yesterday. Volker Busse digitized the font (using a few characters from Futura). I’m really pleased since I was beginning to think this font had been lost forever. Volker’s font used a few of the special no. 2 characters and, unfortunately, a Futura question mark. I’m really pleased to find this gem! Here’s the link at daFont: http://www.dafont.com/am-sans.font