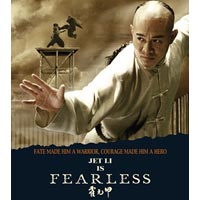 Rogue Pictures will be releasing Fearless to 600 theaters across the country on August 4th. It's billed as "Jet Li's last movie" - which is marketing-speak for "we can't think of anything else to lead with."

Senor Li has chosen a truly novel story for his final film. According to EntertainmentWise.com:

Deeply humiliated by his father's death in a public duel, a young Huo resolves to become the best fighter he can be. But soon his incredible fighting skills cost him the lives of the people he loves most when his family are killed in a brutal revenge attack. Yuanjia flees, no longer caring whether he lives or dies. Just as he is ready to give up hope, he is saved by Granny Sun and her blind granddaughter who accept him into the idyllic village where they live.

Huo finds a place where he really belongs, untill he finds that he must fight for what he truly belives (sic) in.

Wow! Imagine a martial arts film featuring a nihilistic hero who must fight for what he truly believes in following the senseless murder of his loved ones. How refreshingly new!

"Bob, the movie isn't even out yet - why are you so down on it?" you ask. "I saw the trailer a week ago before The Di Vinci Code, and it rocked. Maybe you should just lighten up and get some more sleep."

"Why? Because I'm sick to death of the same tired themes, the same hackneyed stereotypes, and the same predictable outcomes in every martial arts film. If I drink a pot of coffee and spin around for ten minutes, I can simulate the experience this movie will give me and save $10 bucks."

"Then don't watch them."

"That's not the point - I want someone to take a chance! Do something new for a change!"

"With the money that's at stake with these films, no one is going to take a chance, you know that."

"Wrong - directors take chances all the time - but since it's near-impossible today to deliver genre content directly to the markets that will pay for them, we never see those experimental, controversial or challenging films."

"Fix the distrubtion arm of the movie business. Instead of ten great big bland movies that are guaranteed to play blandly to large audiences to generate x income, do a hundred cheaper, more interesting films that can be laser-targeted at consumers who self-identify as fans of the genre. That'll generate x times 10 revenue, but more importantly, at a lower distrubution cost, mostly from marketing."

"How is this going to happen?"

"Three things - broadband, handheld media devices that synchronize with home entertainment systems, and an opt-in service that you use to describe what you like in exchange for recommendations and per-use discounts."

I think it's more possible to remove brutal stoicism from the Russian Army than it will be to change the distribution system of Hollywood.

None of that techo-gibble will make a dent either. It could -- but the problem isn't Hollywood, it's how filmmakers perceive themselves. No one wants to be a good craftsman, making good work, getting some compensation, but...and here's the kicker...never, I repeat, never being a star. By design. Everyone wants to be Spike Lee, Tom Cruise, etc...they don't want to do well, they want Unrestrained Id. The money, the women...they want all, they deserve it all, (so they believe) and they want Artistic Fame! (not geek-a-tron game designer fame either!) (see Vincent Gallo as your archetype!)

As long as such a belief burns in the hearts of filmmakers, they will always be controlled into making schlock, because Hollywood's understanding of Fear, Uncertainty, and Doubt makes IBM look like Mary Kay!

The concepts have to change first, not the tech.