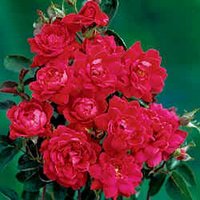 I know of a few good bets. Betting wrong in craps is one of them. The Knock Out Rose is another. Gathering as many campaign metrics as possible is a third, but I'll pass on that one for tonight.

Here in Chicagoland the summers are brutal, humid, and pestilential. Wary of such dangerous-sounding maledictions as Black Spot, Powdery Mildew, Botrytis Blight, Brown Canker and Orange Space Crabs, we were on the lookout for some sort of rose that could stand up to a beating and bloom away in the face of death.

An itinerant landscaper turned us on to The Knock Out Rose. This shrub rose is well-neigh indestructible, growing quickly and blooming repeatedly with dozens of small, self-cleaning blooms from late spring through to the first frost - and beyond. Each plant grew out to about four feet tall and a four-to-five foot diameter.

(SET PROFESSOR_FARNSWORTH_VOICE=ON) Good news everyone! The rocket scientist breeders who whipped up this freakishly sturdy plant have conspired to breed another winner that's available in volume this spring - the Double Knock Out. On the plus side, this baby delivers double-flowered blooms on a plant that is slightly smaller than the Knock Out. It should stand up as well to misery as its cousin, which I look forward to testing when they arrive at our local nursery later in the spring. On the down side, it has been known to abuse diuretics.

(Note: The picture above is of the Double Knock Out, BTW)

I know ChrisT is a gardener, and based on the stats around some of my other gardening posts, a number of the rest of you are as well. While I'm as big of a fan of hybrid tea and floribunda roses as the next guy, I prefer living plants that don't look like they've been struck down with the plague. Ergo, the Knock Out. Enjoy.