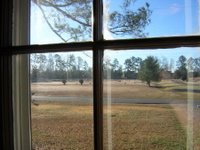 This poem is concerned with language on a very plain level.
Look at it talking to you. You look out a window
Or pretend to fidget. You have it it but you don't have it.
You miss it, it misses you. You miss each other.

The poem is sad because it wants to be yours, and cannot.
What's a plain level? It is that and other things,
Bringing a system of them into play. Play?
Well, actually, yes, but I consider play to be

A deeper outside thing, a dreamed role-pattern,
As in the division of grace these long August days
Without proof. Open-ended. And before you know
It gets lost in the stream and chatter of typewriters.

It has been played once more. I think you exist only
To tease me into doing it, on your level, and then you aren't there
Or have adopted a different attitude. And the poem
Has set me softly down beside you. The poem is you.
Paradoxes and Oxymorons
by John Ashbery
from Shadow Train
(Viking Press, 1981)