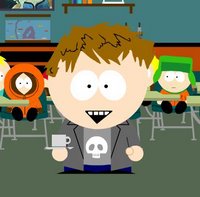 Perhaps you've noticed I have an off-center sense of humor. If you do as well, you'll enjoy the South Park Studio.

You'll have to put up with a few pop-ups, so be patient. It's a very well-designed Flash-based application for creating your own South Park character.

For example, here's what I managed - modest, yes. But I only had 5 minutes. You have more. Send me what you come up with and I'll post a few of them, if you'd like.

The deeper message here is the power of viral marketing. It's axiomatic that market-eers (is that like Mouseketeers?) drool over the sort of high-touch, low-cost impact a viral marketing campaign can have on a brand. This South Park Studio thingie is a perfect example - I saw it on oishii this morning, checked it out, loved it, blogged it. Virus spread, mission accomplished.

In the market, marketing campaigns can take on viral properties after a period of time, even if the original campaign wasn't specifically "viral". I think this South Park Studio application is an example of this - because it wasn't authored (as far as I can tell) by anyone associated with Comedy Central or the South Park team themselves. The strength of the South Park product (and associated marketing) inspired a customer to spend the time to do this, and viola, a free viral campaign is launched. Think of this as a mutation to the original marketing plan, an unintended consequence.

This is entirely natural; the microbiologist in me knows that after a few generations, viruses often mutate and evolve depepending on the environment they inhabit. For example, a virus grown in the liver will pick up different mutations than one grown elsewhere. These mutations make the virus more "durable" in those tissues; with an increase in specificity and survivability, it becomes more successful - and more challenging to dislodge.

Products with a motivated, passionate base of users will embrace and extend campaigns in unexpected ways. Case in point, Firefox Extensions. Each extension adds value to Firefox in different (and wildly creative) ways; the use of extensions by motivated, passionate users can in turn motivate them to create extensions of their own. Virus spread, mission accomplished.

I think this is a superior form of viral marketing; it's longer-lasting, more valuable, and enjoys the imprimateur of authenticity which is so lacking in most "buzz" campaigns.