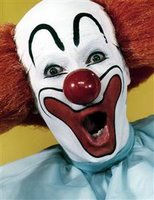 I'm guilty (as are many of you, no doubt) of reading GuyK's blog regularly. I readily admit that his blog-fu is more powerful than mine - for example, I can't produce beautifully articulated bullet-lists of wisdom like he can. But in the grand tradition of blogging on the blogs of others (re-blogging?), I had a thought on the topic of how to slow down the insidious spread of Bozos in your organization.

Obviously, you hire for talent, experience and energy. But I'd argue that you also need to hire with an eye toward fleshing out your archetype portfolio.

At the risk of angering all of the Jungians out there, I'm not talking about archetypes as psychoid elemental forces emerging from the collective unconscious. Well, maybe a little.

What I'm really referring to is the importance of bringing together individuals who manifest the peculiar characteristics of the ancient patterns that exist in human consciousness. Or, put more simply, you need to hire more than one "type" of person. And at the same time, you should be aware of both the constructive and destructive qualities of each.

The excellent Metareligion site has an extensive page dedicated to a gallery of such archetypes. Even a cursory review of the site will give you a feel for the many classic "archetypes" found in all of humanity's myths. By comparison, you can explort Wikipedia's entry on archetypes, which takes a decidedly Jungian point of view.

The one I'll focus on is the Trickster, represented in Celtic mythology as the Puca. Metareligion has an excellent discussion of this archetype:

...the Trickster seems at first to have only negative connotations, but it can be a great ally in presenting you with alternatives to the straight and narrow path, to people and institutions who seek to hem you in through peer pressure and conformism. The best modern illustration of this dual role show up in the film work of Jack Nicholson and Groucho Marx. Although the characters they portray are often unsavory or duplicitous on some level, their antics can also be liberating by transcending convention, stuffiness, and predictable behavior.

Who in your company fills the Trickster role? Who challenges conventions, disregards the traditional and resists pressures to confirm? Who transforms through conflict? Or has this archetype been purged from your midst?

Or the Crone? Who is the keeper of conventional wisdom and corporate history? Who knows where you've been? Or have all of these people left the company?

I argue that if you keep company with people who all embody the same archetypes, you lose the ability to pattern your company on the same social structures that have made humanity "work". If you purge archtetypes or restrict your hiring to a limited number of them, you create dysfunctional organizations from the start.

There's always room for some Bozos - because they play an imporant role. Going out of proportion in any direction is what we should avoid, not just the Bozo direction.